I recently read two different pieces on the New York Times online opinion page, one about the NEED to give up on the Constitution, and then the various responses to that piece.

In all honesty for the first time, in a long time I really have no answer!  "Then why are you writing a blog about it?" you ask.  Well, I don't really know.  I don't like the thought of abolishing the Constitution altogether; I liken it to the foundation of a building.  Especially in an earthquake prone location, foundations are strong but flexible.  It seems that the point of the Constitution was to be a firm foundation but flexible for the times when change is needed.  Was the Constitution written by men (therefore fallible) from a different time period and different issues?  Yes.  Does that mean it doesn't apply today?  No.  They understood that times can change, but in order to have a firm foundation they made it difficult to change.

One of the sections mentioned in the initial piece was Section 7 "All Bills for raising Revenue shall originate in the House of Representatives; but the Senate may propose or concur with Amendments as on other Bills."  Funny, that the most important part of flexibility (that Mr. Seidman seems to be neglecting) is mentioned in the selfsame section that he referenced.  Even though the only place revenue measures can originate from is the House, AND the Senate is the only place from which Amendments can originate.  Rather than abolishing our foundation and trying to rebuild from scratch, it would behoove our government to abolish the all the extraneous bills/laws that burden our country.

It's SUPPOSED to be difficult (inefficient) to make laws and change the foundation.  Imagine a government that could make new laws with little to no bureaucracy.  Laws would be passed at the drop of a hat and as knee jerk reactions to everything.  At the first shooting ALL guns would be outlawed.  I'm not saying that would be a bad thing per se, but apply that to car accidents.  At the first negligent speeding accident that kills an innocent bystander, the government would outlaw cars or make the speedlimit 5mph.  Obesity kills, there's no doubt about that.  But, do you want a government that can pass any number of laws regulating what you can and cannot eat.  What about freedom of speech?  Do you want the government to have the ability to litigate what you can and cannot say?

I liked the first response by Lawrence Tribe, while he doesn't use these words I think I agree with his sentiments about the original piece.  Mr. Seidman offers a lot of rhetoric about a broken system and dysfunctional government, but no real solution other than to throw out the foundation of our system of government.  Supposedly, we should all sit around and rationally discuss the future of our nation and stop genuflecting to the desires of the founders, just how does that work Mr. Seidman?  That's what's supposed to happen in Congress, when was the last time that happened?  If it can't happen with rules to govern it, what make you think that it'll happen once the foundational rules have been abolished?

I find myself on the opposite side of the issue, we should abandon most of the extraneous laws that have plagued and made our country's laws so complicated that no one really understand the law.  Consider this book, Three Felonies A Day: How the Feds Target the Innocent,

about how federal law obscures it's meaning rather than clarify it and this book Go Directly to Jail: The Criminalization of Almost Everything.  We should abolish this bloated system of laws and go back to the basics of the Constitution.  Abolish everything EXCEPT the foundation and rebuild. 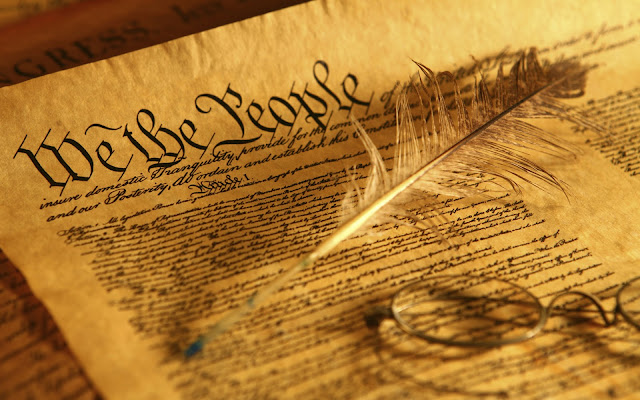 Posted by Samuel Ronicker at 3:30 PM