Essay on Plato, Descartes, and The Matrix

This is an essay I wrote for my philosophy class last week.  I took a more informal approach than my professor wanted, and my grade suffered for it.  However, I think it's appropriate for my blog.

In all honesty I think this part of philosophy is one of the main reasons many people dislike philosophy in general.  Imagine you're an ordinary student attending an ordinary college and you bump into a doctoral student who's sitting at the college coffee shop and you strike up a conversation.  This student is doing some sort of doctoral work in epistemology and is working on skepticism.  What student would enjoy being grilled with such questions as, "How do you know that's true?"  And, even after giving what a regular person would accept as a common sense answer to that question.  The philosopher asks, "Well, how do you know that's true?"  The student gives another different explanation of justification, to which the philosopher asks again, "How do you know that's true?"  After only a few times most regular people would give up, shaking his or her head walking away from such conversations wondering why some people are so wrong in the head.  Here's another tack.  When I asked my wife some questions about justification and epistemology, after pressing the idea a bit she finally gave up and responded, "people need to think less and go to the beach more."  (We live on a sub-tropical island in the South Pacific.)  Epistemology, especially justification and skepticism can eventually devolve into an infinite regress.  Now, these questions may make for interesting movie ideas like The Matrix and Inception, but it's more akin to irritating to an ordinary non-philosopher.  So, let's talk about three different approaches to skepticism and how/why justification is such a hard topic.

First, and oldest of these three is Plato's cave analogy from Book VII of The Republic.  During this book-long conversation Plato brings up an allegory of people that are chained in a cave and the only things they can see are shadows that are cast along the wall.  An interesting side note, different philosophers see this allegory differently.  I noticed this as I had just listened to The Republic audiobook and then heard a philosophy lecture.  The professor giving the lecture seemed to twist the idea and the people making the shadows into the villains.  The point as I understand Plato's meaning in the allegory is not we should be necessarily be skeptical of reality.  It seems more about how philosophers are the only ones that really explore the depths of reality and it's our responsibility to go back into the cave and teach those people what we've seen.  Yes, every part of The Republic is full of depth and meaning, but the people stuck in the cave and their misunderstanding of reality is not, in my opinion, the point of the allegory. (Plato, Book VII)

Then in chronological order, we come to Descartes' Meditations on First Philosophy.  Specifically, Meditation I paragraph 2 stood out to me.  I think this bit is key,  “ … it will not be necessary for me to show that the whole of these are false--a point, perhaps, which I shall never reach …" and this, "… it will be sufficient to justify the rejection of the whole if I shall find in each some ground for doubt."  Though it may seem like it and indeed people often take Descartes for a supreme skeptic, he is not setting out to cause people to doubt he’s merely searching for the only thing that he can really know for sure, without a doubt.  In this search for what can be known with epistemological certainty he says, we'll never reach the point where he could show everything to be false, nor does everything have to have some doubt, just the foundational ideas.  If the foundation is dubious the whole edifice can be considered faulty.  However, in the end, Descartes finds a foundation: I doubt, which is thinking, therefore I exist.  So despite all the doubting and tearing down of the edifice of knowledge, Descartes found the foundation and we can start from there. (Descartes, 1641)

Now we come to the 1999 pop culture treatment of skepticism.  Though not as deep as Descartes’ or Plato’s treatment of not being sure of what anyone knows, it’s still an interesting portrayal of skepticism.  How would it feel to be hooked up to some kind of super-computer?  It seems like it’d be impossible to know unless there were some way to break out.  There has to be someone there with the red pill offering answers to all our questions.  Despite the implausibility of a select few having the unexplainable ability to twist the matrix to their desires, including Neo’s (Keanu Reeves’ character) ability to twist reality and give himself god-like powers in the computer-world that is somehow controlling everyone else’s thoughts.  Though the movie does paint a rather interesting dystopian picture of what it would look like for computers to control everyone’s mind, it seems completely implausible to me.  Though of course, that’s just what the mind-controlling supercomputer would want me to think. (Wachowski, "The Matrix", 1999)

So, how can we escape these epistemological puzzles?  How can we prove that we’re not all in a deep Inception-like dream, or Plato’s cave, or haunted by Descartes’ evil demon? (Descartes, 1641, p. I 12)  Well, short answer is, we can’t.  Well, not enough that we could dispel all doubt and forever put to rest any metaphysical skepticism.  One challenge would be to ask the skeptic how one can live with complete doubt of everything at all times.  Also, the self-refutation of the claim that we’re in a computer, that doesn’t need proof that we’re in a computer.  In other words, prove to me that we are just brains in a vat or disembodied thoughts swimming through an intricate computer SIM world.  However, to me the best test for the metaphysical skeptic is to change something with your mind.  I’m not asking for a miracle.  I’m just saying that if all we consist of are brains floating around in a vats, we should be able, at least a small amount, to manipulate the world around us with only our minds.  I understand that to do so in front of a group of people would seem impossible because not only would one have to change their own mind’s perception of a thing, but everyone else’s as well at the same time.  However, in the privacy of one’s own room or even just one’s own mind, one should be able to change something simple.  Like the bending spoon scene in The Matrix, everyone, with practice should be able to convince oneself that “there is no spoon” and make it appear however he or she wanted.

Despite the character Cypher’s opinion that deception is better than the truth, I’m going to have to side with (well Morpheus and) Plato that it is much better to seek the truth and when one has at least caught a glimpse of it, pass it along so that everyone tries to unhook from the matrix or break the chains binding them in the cave.  Though we can never get to that point, it’s better to live as if that isn’t the case and seek out knowledge than to slog on or stick one’s head in the sand doubting that we even have heads.  Much like Professor Kreeft says of Aquinas building a huge philosophy on a single small foundational point. (Kreeft, 2009)  We can rest on Descartes’ cogito ergo sum and build our epistemology from there.  Even if we’re just brains in vats, at least we’re somebodies.  Even without a body, our minds still exist.  If this is some elaborate dream someday we’ll wake up.  We should build our noetic structure a bit like this dome: 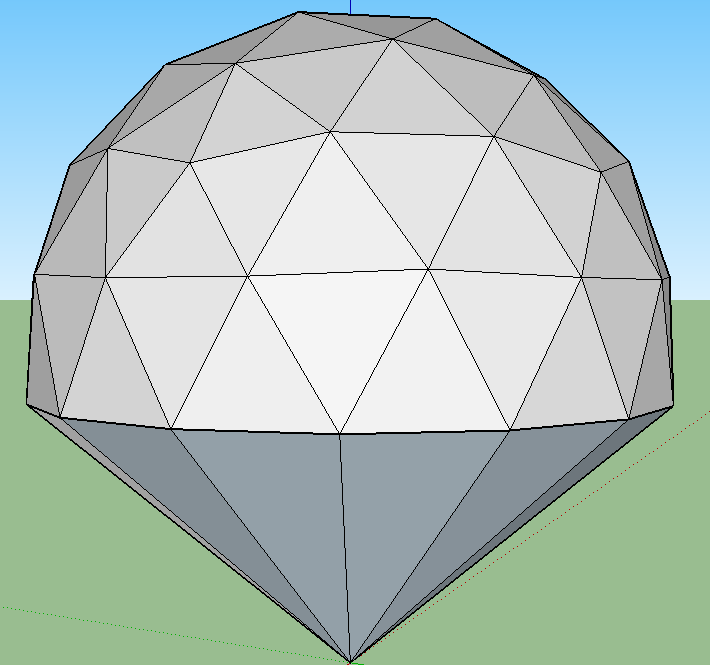 (Geodome, 2004) and have the foundation, though shaky it may seem, if rooted deeply in the foundation that no matter what parts of the dome are doubted the pile upon which it rests is immovable.

Once we’ve established that foundation let us add some depth to the foundation by placing it in God.  That’s not to say that we cannot or should not take the existence of God on faith.  But, if one is driving down the road looking at street signs one cannot live as if every one of them is a lie.  And there are so many signs that point to the existence of God.  So, though I may have, like everyone else, started life taking all knowledge through the evidence of authority; I have since grown up and matured and thought through my philosophy quite a bit.  I have come to a point where the foundation is firmly fixed on my own existence and that existence only makes sense with the existence of God.  On that foundation I build my beliefs.  If someone were to prove to me without a doubt that JFK was assassinated by conspiracy with two shooters; my geodesic dome of knowledge wouldn’t fall apart.  In fact I see this as a kind of synthesis of foundationalism and coherentism.  I really only hold one (or two) basic belief as my central belief.  This is how the coherentism system gets started, with at least one or two foundational beliefs upon which other are built.  My foundation doesn’t depend on my senses.  If anything, my foundation can be said to be the only possible guaranteed a priori knowledge, that is, that I exist.  If I don’t exist and I don’t know that I exist, how can I be asking myself if I exist?  Sure, it might be that my body doesn’t exist and my senses are all untrustworthy, but I most certainly exist and I can use deduction, induction, blind faith, gut feelings, and whatever I want to justify any belief above the foundation.  Each different justification has its own level of importance in the structure that is my belief system.  I can’t escape the question, “how do you know?” any more than any other thinking person, but I can justify what I know in many different ways and the more I defend something the more difficult it is to take it away.

Posted by Samuel Ronicker at 9:17 AM