My Response to: "Why Didn't Anyone Do Something?" by J.T. Cardwell

If you haven't check out the original entry "Why Didn't Anyone Do Something?" by J.T. Cardwell.


"Why didn't anyone do something to stop him?" my best friend looked directly at me and asked with overt disgust and incredulity as we sat on the couch in our living room. The expression in her face and voice was a plea for the justice that was missing from the story. Her eyes bored through mine. I began to open my mouth to answer but ... I couldn't.

Honestly I don't think I can answer this either.  People are evil and it makes me sick sometimes how evil they can be.  I didn't really follow the story of the Steubenville, Ohio rape case, but the perversion of people never ceases to amaze me.  I'd like to think that if I were put in the same situation as the many many bystanders, I would have stepped in and stopped the tragedy.  I know, I have a completely different perspective than those involved.  I've been trained to see things like that and intervene.  The people involved (the bystanders) were probably all kids.  They probably knew nothing about how to step up and intervene when they saw the perpetrators taking advantage of the victim.

I think that is actually worse, if one can really put a measurement on such evil, that is the reaction to the bystanders had.  Would you know what to do if you were a sixteen-year-old kid at a party and saw a young woman being carried around partially clothed and passed out?  I would hope that my children will never be in a situation like this, but if they do ever see anything like this I want them to step up and stop the violence.  The reactions are again, even worse.  Many in the community commented on the pictures of the incident with evil spite and claims of her impropriety as if she somehow wanted this to happen?!  Really people?  I can kind of forgive young kids for not intervening, but what about the adult reactions later?!  These are supposed to be adults, they should know better. http://en.m.wikipedia.org/wiki/Steubenville_High_School_rape_case


Looking at my best friend's disgusted and incredulous expression, I recognized the real emotion she felt: betrayal. And I realized I didn't have an answer for her.

"Betrayal" is right!  Betrayal of an entire town of this poor young woman.  Especially in their "defense" of the perpetrators.  I think the most disgusting fact in the whole situation came from the media coverage: 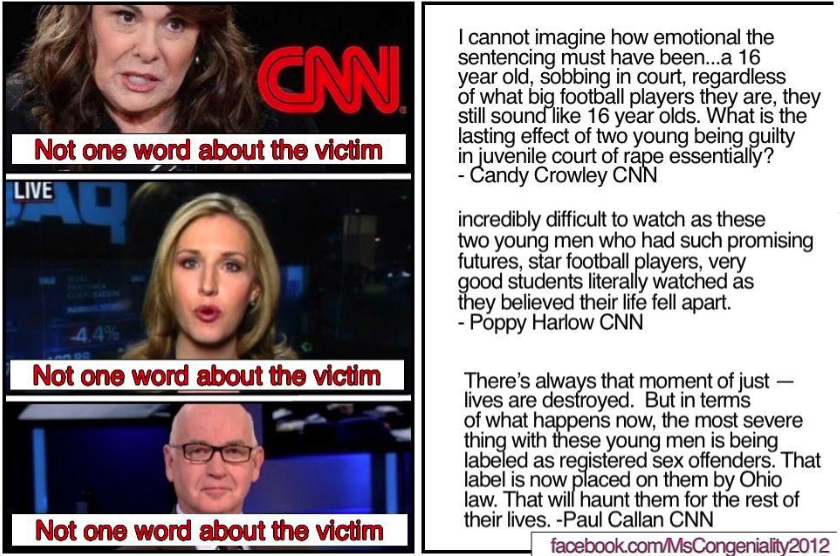 If anything, the "punishment" did not fit the crime!  These boys knew what they were doing.  They knew that it was wrong.  They should have been punished to the fullest extent of the law!  Their lives were rightfully ruined!  They ruined the life of an innocent, they deserve to be punished.


I didn't know why coaches and school administrators were impeding the investigation and attempting to conceal information.

I didn't know that either!  Those administrators and coaches should also be punished to the fullest extent possible.  There is some truth to the idea that an immature brain cannot make decisions on the same level as an adult, but what were they thinking?!  These are adults.  They should be thinking through their decisions.  How could they impede the investigation?  Did they think they wouldn't get caught?  Did they think they were somehow doing the right thing?  What kind of world are we living in where school leaders would stand up to illegally defend rapists rather than a victim.  One could almost forgive them if they had broken the law to defend the victim.


Empathetic enough to open my eyes wide enough to finally recognize the complexity of the truth: rape culture isn't just an over-sensitive exaggeration college girls claim exists to get attention, as is often asserted. No. It was as American as apple pie. And it was now Steubenville, Ohio's legacy.

It's tough, but we need to find a balance between seeing a rape culture in the entire US, and acknowledging there's a problem and seeking ways to address it.  We will never eradicate this disease completely, but there are definitely steps we can take to help.  There needs to be a balance between maintaining gender identity and gender roles, while promoting gender equality and educating about rape and the evils thereof.  http://en.m.wikipedia.org/wiki/Rape_culture
Posted by Samuel Ronicker at 7:34 PM